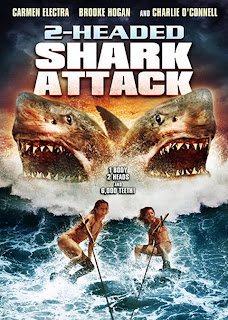 Oh I'm for real. This is not a test, yes that just happened, and no, I have not taken up Photoshop in order to make my worst fever-dreams a reality. I'm as serious as an aneurism. Do not adjust your television sets or check to see if someone slipped LSD in your coffee. I give you "2-Headed Shark Attack." Ladies and gentlemen, welcome to The Asylum.

The Asylum is a movie production company that has been around for a while now. They make what they call "mockbusters," which are low-budget (see also: no budget) rip offs of other, more successful and popular films. Think I may be nitpicking when I say they are rip-offs? Some Asylum movies of note are "Snakes On A Train," "The Day The Earth Stopped," and "Transmorphers." The point of that, of course, is so that grandma can buy the wrong movie in the clearance bin for Junior's birthday.

Ever since finding out about them, I have been a fan. I mean, how could you not love movies with names like that? The sheer audacity and testicular fortitude it takes to make movies that blatant is astounding. Now, don't get me wrong. Overall, these movies are god-awful. I mean bad. Most of the time, they aren't even the kind of bad that is enjoyable. They're just so bad they're boring.

Movies like "The Terminators" and "Megaquake" are painful to sit through due to their incredible lack of anything interesting happening, but every once in a while, The Asylum knocks one out of the park. "Mega-Shark vs. Giant Octopus" in particular is fantastic in its ridiculous nature, and "100 Million B.C." as well as "The Land That Time Forgot," are their best action films. And "100 Million B.C." has Michael Gross! That's awesome!

The Asylum also deserves credit for even one-upping their source material on one occasion. Their version of "Paranormal Activity," called "Paranormal Entity," was FAR superior to the movie it is ripping off, not a difficult task mind you, but "Paranormal Entity" is actually not a bad piece of work by itself, even if it wasn't a rip-off, and is unquestionably their best movie.

But back to "2-Headed Shark Attack." The Asylum is kind of shackled to monster features like this, and they've made A LOT of them, most involving really big sea creatures. Most are pretty pathetic, and while "2-Headed Shark Attack" pretty much falls in the middle of the pack in terms of quality (it is generally just "meh" at best), it's their most efficient entry in terms of doing what it set out to do. And what does it do?

I mean, that's all you really need to know, because that's the only reason this movie exists. The rather unnecessarily large cast is roughly 70% female, not a single one of them is harsh on the eyes, and all but two of them spend the entire film in bikinis or occasionally less. And every 10 minutes or so, some of them get eaten by a shark with two heads.

You know what? One, please. 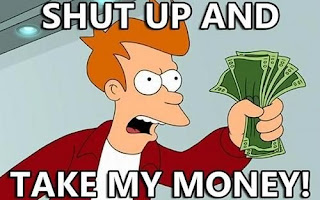 I'm serious. After "Drive," "The Ides of March," and "J. Edgar," I'm ready for some entertainment, damn it. So you know what? I'm kicking back and enjoying the smut. Break out the popcorn and beer. Let's light this candle.

If I had to describe the story, I would say it's um…present. It exists, but it doesn't really like to make itself known. It's a very shy creature. Basically, there are a bunch of college students on a "semester at sea" boat, which is about a third of the size needed to house that amount of people at sea for a semester, but was obviously the biggest boat they could borrow from one of the director's rich friends. Along the way Carmen Electra, boobs, bad acting, and a 2-headed shark happens and an island explodes on itself. And that's about it really.

The attacks, which one would assume would be the highlights, tend to be some of the weakest moments of the film. There's effectively no tension at all, because the movie never stops to NOT do the same thing it's done before. The moment someone gets the water, they immediately go to the bad CG-shark swimming towards them, and after an ETERNITY it finally gets to the person and eats them in a series of bad edits. And since the shark has two heads, almost every attack involves two people falling in the water at the same time to be eaten by one head each, because we didn't get the fact that it's a 2-headed shark based on something like the title.

Hilariously, there's a CG shot of the shark chomping at the water (and nothing else) that is recycled several times throughout the film when the shark is eating someone, even when it was clearly shown in the shots before and after it that there was somebody in its mouth who disappears for that one shot. Then they're back in the next one. It's pretty funny and makes for a hell of a drinking game that can be played with any Asylum movie: "Spot the recycled shot." You'll be bombed before 30 minutes, which isn't a bad way to watch these movies.

I mentioned the acting before and yeah, it's pretty rough. It's obvious that these kids were not chosen for their acting prowess. Let me put it this way: Brooke Hogan (yes, the Hulkster's daughter) is one of the better actresses in the film. Think about that. Carmen Electra actually isn't given that much to do, which I would normally say would be to the film's advantage, but it's not like she'd bring the movie down. Hell, I'm pretty sure she has the most acting experience of anyone in this thing.

It's just a weird thing when Debbie Gibson and Tiffany in "Mega-Piranha" were more convincing.

There was one exception, however. Mercedes Young, who plays the token black girl is given the best lines in the movie, and gives amazing readings of them. Her finger snapping, head shifting back-and-forth delivery of such gems as "Oh, he gon' die!" and "You's a bitch" are hysterical, and are hands down the most entertaining part of the film besides the bikinis.

For anyone who watches this movie and complains, take a look at the DVD cover again. What the hell else do you want? If you picked up this movie, there's no way you didn't know what you're getting yourself into. And you have to admit, at no point does "2-Headed Shark Attack" lie to you. Trust me, movies lie to you all the time with this stuff. Low budget as The Asylum is, it's nice to have some honesty for once.

THE BOTTOM LINE: While not the best movie The Asylum has made, "2-Headed Shark Attack" is far from the worst. If you've seen and even halfway enjoyed any of their other films, check this one out. That being said, it's still low-budget schlock that's just a tad south of a Sci-Fi Channel movie, so unless you dig that stuff, I shouldn't even have to tell you to skip it. Me? I enjoyed it.
Posted by Pat Jackson at 5:42 PM